A Conversation between Bono and Jonathan Ive (Apple) 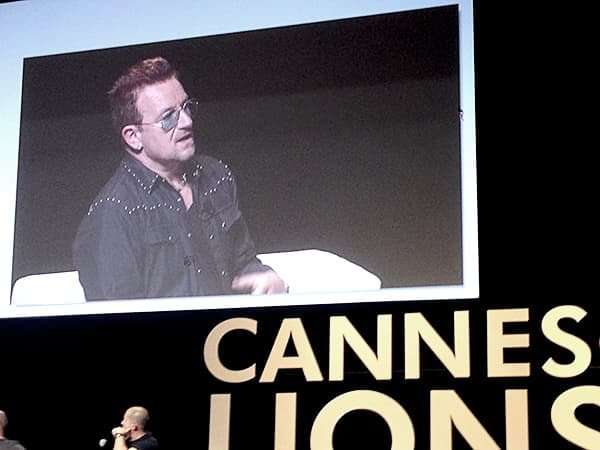 In an exclusive seminar for Cannes Lions delegates, Bono will join Jonathan Ive, Apple Inc’s Senior Vice President of Design, in a discussion moderated by Shane Smith, CEO and Founder of VICE Media, and introduced by Anne Finucane, Global Strategy and Marketing Officer of (RED) partner, Bank of America.

Bono and Jonathan Ive will discuss the success of (RED) and it’s unique collaboration with global partners – including Apple, (RED)’s largest corporate contributor to the AIDS fight – and the record-breaking (RED) Design Auction curated by Jonathan Ive and Marc Newson.  The auction resulted in $44 million for the Global Fund on World AIDS Day last year.

Bono is the lead singer of Irish rock band U2 and a well-known activist in the fight against AIDS and extreme poverty. He is the co-founder of ONE and (RED).  ONE, with nearly 4 million members, is an advocacy organization campaigning for government policy that saves lives and improves futures in the poorest parts of the world.  (RED) works in partnership with some of the world's most iconic brands to raise money and awareness for the fight against AIDS.  To date, (RED) has generated more than $250 million for Global Fund programs working to combat the disease in Africa. Bono has received numerous awards for his music and activism, including 22 Grammys, TIME Magazine’s Person of the Year (with Bill and Melinda Gates), the Legion D’Honneur from the French Government, and an honorary British knighthood.

Shane Smith is the founder and CEO of VICE, the global youth media brand. One of the industry’s most respected visionaries, Smith is also a critically acclaimed journalist, and the host and executive producer for the Emmy nominated news series, VICE, on HBO.

Under Smith’s guidance, VICE, initially launched in 1994 as a punk magazine, has expanded and diversified to become the world’s leading youth media company; operating an international network of digital channels, a television production studio, a record label, an in-house creative services agency, a book-publishing house and a feature film division.
Through a network of global partners including YouTube, Facebook, Twitter and Youku VICE reaches hundreds of millions of viewers every month. Smith has reported from the world's most isolated and difficult places, including North Korea, Iran, Afghanistan, Kashmir and Liberia.